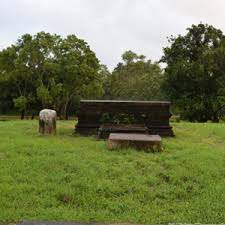 Toluvila Aramic Complex lies in the outer circle of the ancient Anuradhapura city, close to the Anuradhapura railway station. It has been identified as the place where the Great Mahinda Thero took shelter on their way from Chethiya Pabbatha to Maha Viharaya in the 3rd century BC.

The monastery is appears to be belonging to the late Anuradhapura period (7-9th centuries). The original name of this site has not been discovered and it is now known as Toluvila, the name of the  village.

Toluvila has been identified as a Pabbata Vihara Complex based on architectural features which includes a moat surrounding the vihara complex. A large number of ruined buildings surrounds the main image house which at a elevated platform. This main image house is the most prominent and preserved though no statues exists.

Toluvila consists of ruins of a once magnificent image house. Three granite caved images were discovered in this image house, one seated and 2 standing. The seated satue in the Samadhi posture measures 5 feet 9 inches in height and is considered the most elegant Samadhi Statue in Sri Lanka which is now moved to the National Museum in Colombo. A smaller bronze replica of the granite statue found underneath the seat is also kept in the National Museum.