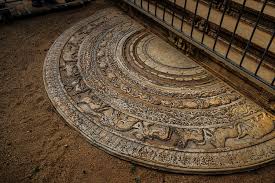 Sandakada Pahana ( Moonstone) is a semi-circular stone slab usually seen at the bottom of staircases of ancient religious places as well as some ancient royal palaces in Sri Lanka. It is a unique creation of ancient Sinhalese architectures. The Moonstone located in the Mahasen’s Palace is the finest and best-preserved Moonstone found in Sri Lanka.

the symbols and their arrangement represents a great religious meaning. The widely accepted interpretation was introduced by Prof. Senarath Paranavithana.

According to his interpretation,

The moonstone symbolizes the cycle of Sansara.
The level symbolize worldly desires Thanha
The lotus depicts the final achievement of Nirvana.
The elephant, bull, lion and horse depict birth, decay, disease and death.
The swans symbolize the distinction between good and bad.

The moonstone found belongs to the Polonnaruwa period has removed the symbol of the bull. During that period the Sri Lankan culture was heavily influenced by South Indian customs and traditions due to a number of invasions. The bull is considered a venerated animal in Hinduism. As such historians believe that the removal of a bull from moonstone in the Polonnaruwa period occurred due to this influenced.