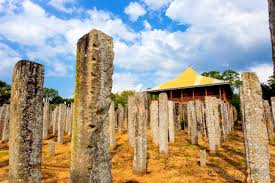 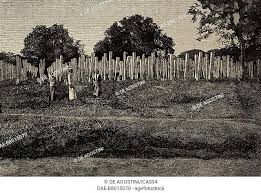 Lovamahapaya is a building situated between Ruvanveliseya and Sri Mahabodiya in the ancient city of Anuradhapura, Sri Lanka. It is also known as the Brazen Palace or Lohaprasadaya because the roof was covered with bronze tiles.

It was originally built by King Dutugemunu more than 2000 years ago, but throughout the ages it was rebuilt many times, each time a little less grandiosely. There are remains of 1600 columns all that is left of this huge palace, archaeological evidence said to have had nine storeys and could accommodate around 1000 monks and attendants.

The current stand of pillars (now fenced off) is all that remains from the last rebuild – that of King Parakramabahu around the 12th century.